Facial hair growth is like a thumb print - no one's grows exactly the same. Knowing how your beard grows enables you to get the best possible shave. When starting out, there is a generic ‘order’ in which you can attempt to make your passes. This helps if you’re just getting started and a bit unsure where to begin. Once you develop an understanding of the growth of your hair, you will develop what suits best for you. The numbers state which order and the arrows depict what direction to shave in.

If only part of the face is shaved, this is a "partial pass." A shaver may, for example, make a "partial ATG pass" on a troublesome part of the neck. Of course, one may speak casually of a "pass" when a partial pass is meant: "This morning I shaved WTG and XTG, then took a ATG pass at my upper lip and got it BBS!"

WTG - The with the grain pass[edit | edit source]

XTG - The across the grain pass[edit | edit source]

ATG - The against the grain pass[edit | edit source]

Although requiring trained muscle coordination skills and a touch, that can only be acquired with practice, the mere act of shaving with a straight razor does not take a vast amount of knowledge. It is not the scope of this text to present the basics, but to present a number of finer points to the use of the straight razor. Seasoned shavers have most likely adopted most of these special shaving tactics, many even without fully realizing it. But it possibly took them years to develop them. This text aims to providing those, that have their first couple of successful shaves under their belt, with a few short-cuts to reinventing the wheel. It is not advisable to try these things if you can not perform a comfortable and complete multiple pass shave with consistent success. The tips are mostly meant to improve smoothness, and to tackle stubborn spots of facial hair growth. [1]

The easiest way to move a razor over the skin, is to guide it in a direction, perpendicular to the edge. As a result the razor “chops” the hairs, much like an axe chops a young branch off a tree, with one blow. Out of a physical viewpoint this way of severing something requires the most force and is the hardest on the cutting edge. By adding a slight rotating motion to the blade, the cutting action becomes more effective. For ages, farmers have been harvesting wheat with this very effective style of cutting with a tool called scythe. Adding a little scything style to the razor will allow a smoother cut, helps the longevity of the edge, prevents pull, helps to prevent the blade form being stopped by stubborn whiskers, and might do more for your shaves’ closeness than boosting the actual keenness of the blade. A word of caution: scything in combination with a too steep cutting angle, is a perfect recipe for slicing into the skin.

In guillotine style cutting, the edge is held a bit angled in relation to the cutting motion. For some shaving strokes it is easier to perform than the scythe itself. 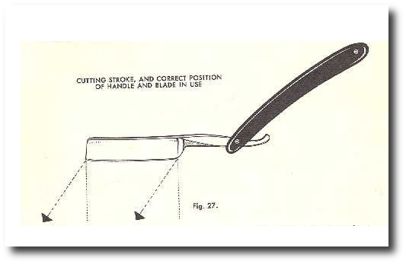 Slicing is occasionally used to refer to the guillotine style cutting stroke, but is more often used to describe what happens when the razor slides across the face in the direction of the edge  of the blade. Such a slicing stroke with a shave ready razor will easily cut the skin and is not considered a shaving stroke. 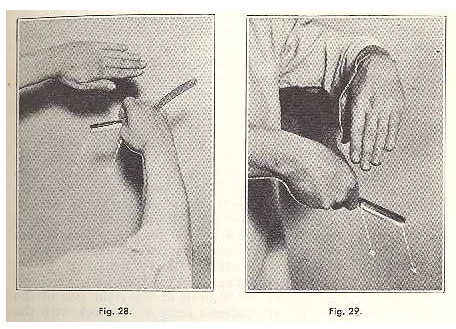 Whiskers rarely grow straight up. They grow ordered in streams where the hairs lean in the same direction towards the skin. We call this: the grain. Most shavers shave in passes. First with the grain (WTG), usually followed by subsequent passes across (XTG) and/or against (ATG) the grain. This is considered basic shaving knowledge. Together with the direction at which the hairs are tackled, the used cutting angle is one of the most contributing factors to a successful shave. The cutting angle is the enclosed angle between the surface of the skin and the razor (cf. the drawing below). Different cutting angles are required to maximize the results of the different passes. The WTG pass requires a bigger angle, because otherwise the razor will not immediately grab the hairs. The XTG and more importantly the ATG pass ask for a notably smaller angle. Certainly during the ATG pass, if you are blessed with whiskers that lay almost flat to the skin, the spine of the razor may be as good as touching the skin. The way the skin is stretched also affects how the hairs stand up in relation to the skin’s surface. We will address this in a separate paragraph.

Another important tactic for closely shaving hard to get spots, is to pull that part of the skin to an area where it can be shaved more successfully. Especially with patches above and below the cheekbones and chin, this is a valuable option.

This is a technique, mainly to be used during the ATG pass. The blade is moved back and forth in short strokes over the skin, without lifting it. Pressure needs to be extremely low. The first part of the stroke cuts the hairs and the second, withdrawing part of the stroke smears an amount of lather back on the skin, preparing for the next stroke that will cut the hair even closer. This is only useful on dense parts of the beard where thick whiskers require more than one stroke to be gradually cut till the "zero"-level. The sound produced by the razor (if it’s a hollow ground one) will guide you through the process, steadily moving ahead while making short overlapping strokes. It is best reserved as a last resort, to achieve ultimate smoothness on renitent spots.
Retrieved from "https://shavelibrary.com/index.php?title=Shaving_passes&oldid=11037"
Category: