From Shave Library
(Redirected from Coticule)
Jump to: navigation, search 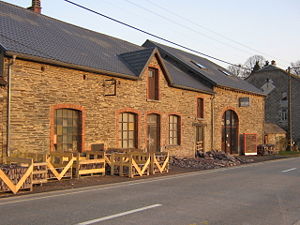 The place were the magic happens: our workhouse, store, storage room and bureau

This atelier is also used to produce natural construction stones (like the ones our building is made off). These stones are stored in pallets in front of the building.

Our quarry is located at "Thier del Preu" (which means "height of Preu", Preu is a place name). Our extraction site is approx. 300 meters by 100 meters and we are at a depth of +/- 50 - 60 meters. The quarry is at a 2 km distance from our Atelier. We need to extract approx. 2 tons of rocks to have 1 kg usable Coticule.

The Production of the Coticule Whetstone[edit | edit source]

These Coticule plates have a thickness between 7 and 14 mm. Sawing these plates is a very important job. It has to be done very careful to maximize the amount and size of Coticule plates. The raw Coticule rocks have cracks, black manganese spots, quartz blocks and other impurities in them so it requires a certain amount of experience and handiness to maximize the good Coticule!

Gluing the Coticule plates on a black schist[edit | edit source]

This is the second step in the production of the Coticule whetstone. We often get the question why it's done. The reason is simple! Coticule plates are so brittle that if such a plate falls of a height of 1 meter it will break into several pieces. So we use black Brazilian or Portuguese natural schist as a base to glue the Coticule plates on. This way we have a sturdy whetstone that can handle several shocks!

This also is a very important job! This step is determining the final size of a Coticule whetstone (both rectangular and odd shaped stones!). The man doing this job has to look very careful at the Coticule because he needs to cut right through black lines or other faults in the Coticule and so maximizing the surface of Coticule without minor or major faults.

This is the last step of the production. Every Coticule stone is hand polished on a diamond polishing table. Every side of the stone will be polished and the edges will be rounded.

Every day the production of the previous day will be sorted in to quality grades and sizes. This happens in our storage room.

The following two photos shows how the size of a Coticule bout is determined. This is done by using a sizing chart. 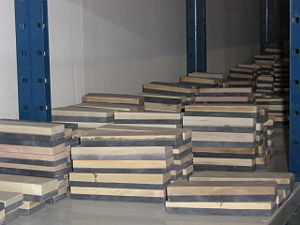 I hope you liked this little explanation and if someone has further question, shoot away!

Coticules cannot be given a grit rating like one would do with other hones. That is because they work quite different than the majority of hones that abrade steel by means of small particles that scratch the steel away. Not Coticules. Mother Nature has loaded this exceptional rock with "garnets". Garnets are a kind of very hard crystals that are roughly round in a faceted way. They vary in size between 5 and 15 micron (in Coticules) and they abrade the steel in a very slow and gentle way. They do leave a scratch pattern, but it is very shallow and wavy. If you release the garnets from the stone and mix them with water, we call it "slurry". It is done by putting water on the hone and rubbing with another piece of Coticule till a milk-like substance has formed. In the slurry, the garnets are free to spin underneath the steel while honing, and this speeds up the process tremendously.

Many Cotilules have a cutting speed comparable to a 1K synthetic hone, when used with slurry. It has been reported that Coticules with pinkish shades are often among the fastest Coticules, but you never know until you try. With a fast stone, the slurry will start show grayish discoloration almost immediately, from steel entering the mixture.

In slurry mode, such a Coticule is a superb hone for bevel setting and correction. The resulting bevel doesn't carry deep scratches and is ready for refinement on hones that can push the keenness a bit further. Coticules with slurry will prevent the edge from becoming sharper than a certain level. It is extremely sharp for a knife, but for shaving there still is some pulling sensation at that keeness level. At the same time, this behavior also prevents overhoning.

When used with water only (no slurry) Coticules are among the best finishing hones, but in that mode they offer hardly any keenness improvement. Their benefits lie into smoothing already keen edges. The resulting edges are nice to the skin and seem to discern very well between severing whiskers and catching skin. (although decent shaving technique remains important of course)

We found no real variance between the Blues, they all behave very closely the same. This is not so with Coticules. They show significant variance when used with slurry, but differences practically dissipate when they are used with water.

With slurry all coticules level off at a certain keenness that is only barely shaveable. When this level is reached, diluting the slurry every 10 laps with 2 drops of water till eventually all slurry is washed away over the course of 70 to 100 laps, dramatically improves the keenness, but the final outcome is a bit unpredictable.

A Coticule, when used with water as a polisher or finisher, smooths out almost any edge, also those that are sharper than what can be achieved with the Coticule by itself. It will not refine the edge as such, only smooth out the previous scratch pattern and leave it there.

With a heavy slurry, a good coticule can easily do the work of a DMT-1200 for honing out small edge defects, at the cost of some rounding at the bevel tip. For all other use on razors the slurry must be kept thin. Slurry on the Blue must also be kept thin.

Controversial, but we stand by it: Belgian hones do not lend their unique properties form a very fine grit rate. They are unrivalled because they leave such shallow scratch patterns, left by their round honing garnets that create a wavy surface. As a result the edge is far less jagged than that of many synthetic hones. This also means that the edge of the Blue with its larger garnets is even less jagged than that of the Coticule, a capacity that explains the higher level of keenness left by the Blue with slurry than that left by the Coticule with slurry.[2]

Where to Buy[edit | edit source]

Below is a list of some official vendors that currently offer Belgian Coticules and Blue whetstones. This list is neither comprehensive nor exhaustive, and SRP is not associated with either of these vendors. They have, however, been recommended by several SRP users.

Do not forget to check the SRP Classifieds for great deals on new and used hones!