A method for honing razors using one finishing hone and a series of Nagura slurry stones.

This is a method I use to hone straight razors on Japanese finishing hones. It's based very closely on the method taught to me by my barber, adapted to include elements from a similiar one described by Kousuke Iwasaki in his barbering manual of 1964 "How to Hone Razors and Japanese Kamisori" [レーザーと日本剃刀の研ぎ方]. It produces a wonderfully smooth, sharp edge, though it takes some time and patience to really squeeze all you want out of it.

Please note, this is of course just one way of honing using these hones, and I can't really speak to other methods. I can say, based on my experiences with about a dozen Japanese finishing stones, of both known and unknown quality, I have never been able to get similar results using them JUST as a finishing stone (after a progression of coarser hones) as I have using this method.

A Brief Intro to Japanese natural stones… (If you already have your hone, feel free to skip this part.)

Japanese natural hones (天然砥石-tennen toishi) are widely considered among the world’s best stones to sharpen a wide variety of tools—including, naturally, straight razors. The stones found near Kyoto, especially, have been prized for their exceptional honing effects for hundreds of years. There are a large number of hone mines around Kyoto, all of them producing great stones, but in terms of price and quality the stones are divided into two large groups, “Eastern Things” (東物-Higashi Mono) and “Western Things” (西物-Nishimono), with the Eastern stones being the more expensive, and more highly regarded. These stones inlcude the Nakayama, Oozuku, Narutaki, Shoubudani and Okudo. Nakayama, of course, is the most famous and highly regarded, but for our purposes (honing razors) Oozuku is also very good, and in fact any of the eastern stones should be sufficient.

However, when selecting a stone, it can be kind of difficult to know what to buy—there is a bewildering variety of stones available, and it is very hard to know the differences between them. Basically, for straight razors, you are looking for 2 things: a hard stone, and a fine one. MOST stones will be fine; all of the Eastern Things are considered “finishing” stones, meaning very fine, and frankly the variation between types (kiita, asagi, whatever) will be no greater than the differences between individual stones…meaning, don’t worry so much about the name, worry about the stone itself. Additionally, hardness is mostly an individual trait, but often kiita stones will be softer than Asagi stones, so that may help. HOWEVER, the only real way to tell how a stone is going to work for your purposes is to try it out. Really. There is no other way. You can buy a stone from someone with the same purposes, and trust their word, but it all comes down to experience with the stone.

That being said, there is one external thing that can help in the selection of a stone for razors: the “Maruka” stamp ( ㋕正本山, arranged vertically in a rectangular frame). This is a brownish stamp (that may be VERY faded—it is OLD) on the small end of the hone. This stamp indicates that the hone was tested by the original owner of the Nakayama mine (the Katou family) and deemed top quality. It should be very hard, very fine and pure, without damaging inclusions. If you can find an authentic Maruka stamped hone, the chances that you have a top quality hone are pretty darned high. As is the price…

Japanese finishing hones are often used as just that, a finishing hone. Meaning, they give a final polish to a razor at the end of a progression of coarse to fine stones. However, in studying Japanese sources, and in taking honing lessons from my Barber (a man who has been using Japanese waterstones to hone razors for nearly 40 years. Hones which, by the way, he has given me to use myself) not once has there been mention of using any coarser stone to hone a razor, neither a Japanese “Kamisori” nor a Western-style straight razor.

Instead, all honing is done on one hone, the Honzan （本山） using a progression of SLURRIES. Thus, having the proper selection of Nagura and slurry stones is essentially as important as the honzan itself.

The main show. For more information, please see the big long intro above

Nagura are small, whitish/striped stones with a soft, chalky texture, sourced from a mountain near Mikawa city, in Aichi prefecture Japan. They are divided into a wide number of qualities, but for razors we are only concerned with 4 types: Botan, Tenjou, Mejiro and Koma.

The basic recommended set includes 1 Botan, 1 of EITHER Tenjou or Mejiro, and 1 Koma, but Koma are getting more and more rare, and thus more and more expensive. If you don't have a Koma, it's ok to skip it but having it makes the transition smoother. 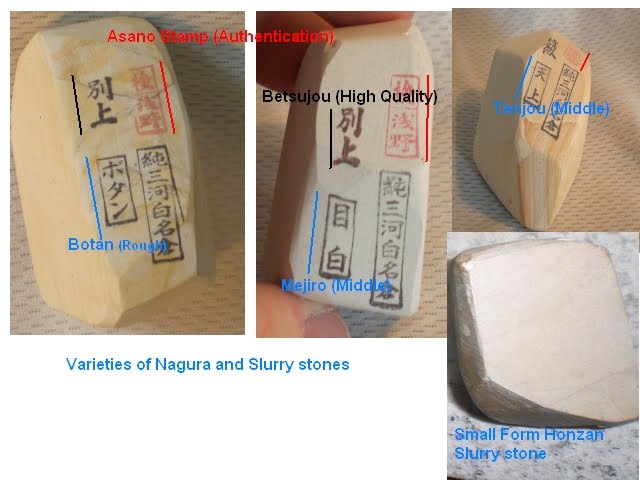 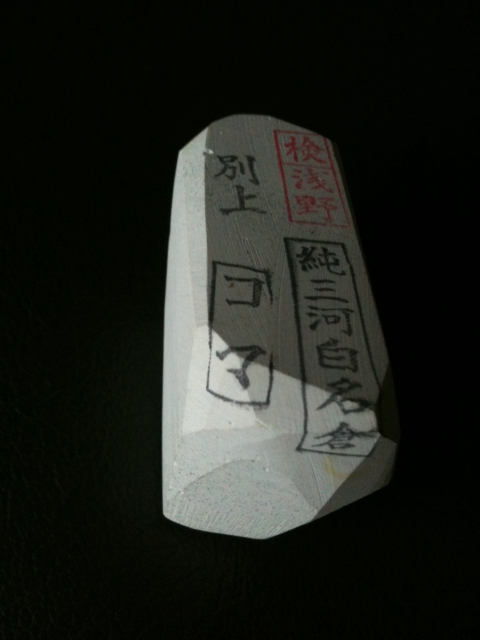 This is a small piece of a finishing hone, like the main hone above. It should be of roughly the same hardness as your main stone. When he gave me his hones, my barber told me that the most important part was this stone…and after several months, I am finally understanding what he meant.

A microscope can help with examination of the bevel/edge, but it certainly isn't necessary.

There are two basic steps to honing on Japanese hones. The initial sharpening, done with rough slurry, and the final honing/polishing, done on Honzan slurry.

First, let's talk about the initial sharpening. This is done with a razor that won't shave. It pulls or won't cut hair, but it might "feel" sharp to the touch. This is NOT setting a bevel, as you might do when repairing a damaged razor. That work is best left to a rough stone like a DMT 1200 or even lower. The honing done here CAN be done after setting that bevel, though.

Here's what we do.

Get your Honzan hone, your NAGURA, and lots of water.

(1) Wet the stone well, so that the top is wet to the touch but not pooled with water. Take your Botan and rub it evenly over the surface of your hone without pressure. Raise a milky white slurry over the entire surface of the hone. The slurry should be about the consistency of 2% milk. 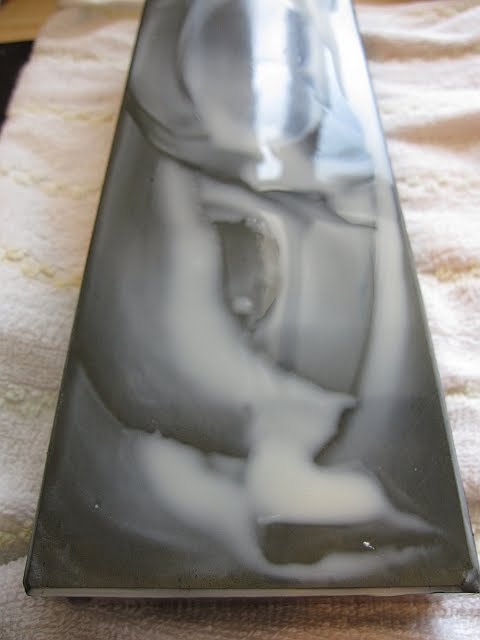 (2) Using this slurry, hone your razor. Use whatever patterns (X, V, Figure 8, whatever) you are comfortable with, and use only the pressure necessary to keep the razor flat on the hone. Continue to hone until the entire bevel is evenly colored white. The slurry on these hones causes a "speckled" white haze. The bevel should be EVEN along it's entire length, there should be no patches of shine or sparkle. Also, the edge should start to feel sticky and should be able to shave arm hair with some pressure.

This might take a while, and if your slurry gets thick, or dark grey, it may be necessary to "refresh" the slurry, meaning making a new slurry as in (1). When you feel that the razor's edge has reached a consistent level of sharpness and coloration along its ENTIRE length (don't skimp on this), then move to (3)

(3) Wash your razor, hands and hone thoroughly, to remove any trace of the Botan slurry.

(4) Get your middle nagura--either the Mejiro or Tenjou--and raise a slurry on your honzan, as in (1).

(5) As in (2), hone your razor with the slurry from the Tenjou. Your goal here is to sharpen the razor, and as the middle slurry is finer than the Botan, you are going to polish out the coarse marks of the Botan. Hone until your edge feels EVENLY sharper along its edge, and it should be able to shave arm hair fairly easily. The haze on the bevel will also darken, it won't be as white as the Botan because of the finer scratches. Again, the color should be even along the whole bevel, with no patches of difference.

Be prepared to refresh the slurry a few times until you are satisfied with the results.

If you have a Koma, repeat the above process with it. Otherwise, move on to (6).

(6) Wash your hone, razor and hands VERY thoroughly. The next step will be putting the ultimate finish on your razor, and you don't want any stray heavy particles ruining it.

We are now FINISHED with the initial sharpening step. The next step is the final hone/polish. It is also the beginning step for a "touchup" hone, for when your razor is feeling a little tuggy.

(7) Get your small honzan stone and, as in (2), raise a slurry on your clean stone. This should take much longer than with the nagura, as the honzan is a much harder stone. When you have raised the slurry, you are ready to hone. 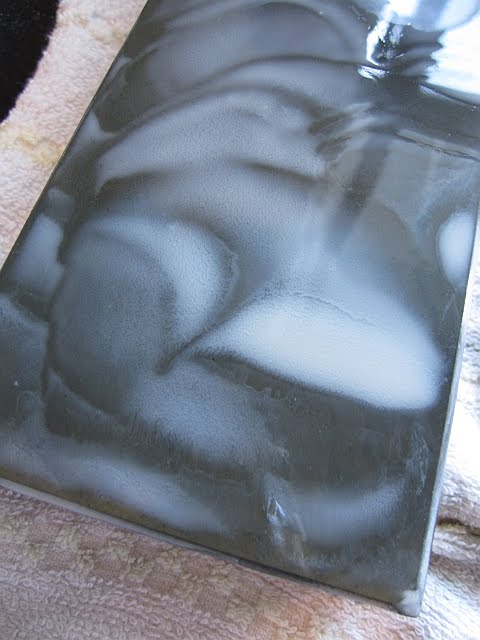 Honing the razor on honzan slurry is different from the nagura. As you hone, the particles from the honzan will start to break down and get finer and finer. This process is what gives the final, super smooth edge you want, but before that you have to polish out the scratches from the nagura. In order to do this, you will have to balance the honing power of the initial slurry until it is time to finish the polish.

Here's how we do that.

(8) Start honing using very light pressure. Watch the slurry very carefully. When the slurry begins to darken and get a little "sticky", MAKE NEW SLURRY. This will help to continue honing, without letting the particles get too small and start polishing prematurely. 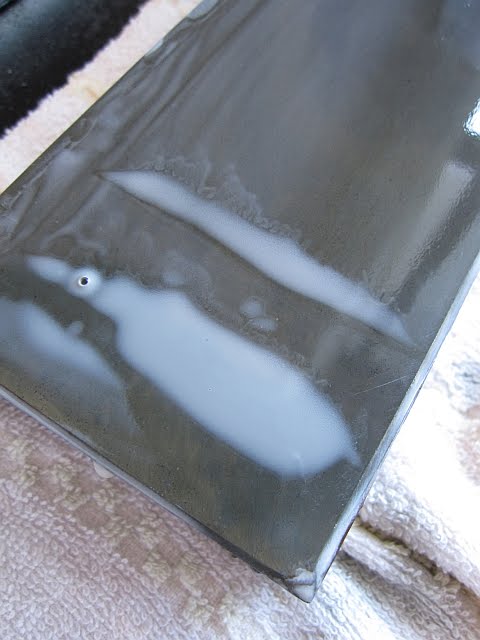 (Time to refresh the slurry)

(9) Continue to hone, making new slurry as necessary, until the entire length of the bevel loses the whitish nagura haze and takes on a shiny, cloudy polish. The razor should start popping hairs above the skin. It may take several rounds of refreshing the slurry to achieve this (figure at least 3, and maybe more, depending on the hardness of the steel and the qualities of your stone). PLEASE NOTE: Whenever you try any hair test, you should lightly strop your edge once or twice on something clean to remove any slurry residue from the very edge of the razor; the residue can interfere in your test.

(10) When the razor has taken an even, shiny hazy finish along the entire length of the bevel, and feels evenly sticky along the entire edge, STOP refreshing the slurry. Continue honing until the slurry breaks down completely, and becomes a thin, sticky film on the hone. At this point, you might want to add a drop of water or two to keep polishing.

Once you've reached this point, your razor should be ready to test shave. If the razor fails the shave test, think about what it needs, and go back up the routine to a point that seems reasonable. Experience is really the only thing that can guide you here.

I hope this helps. This is how I hone, and how my barber hones, and how people before me have honed for years. It works for me.