About two weeks back this method for honing a razor was mentioned and at that time I said I would be posting a review of it in the coming week, well, I'm a little late. Here is the review and honing guide for the 3M honing films, or the scary sharp system as it applies to razors.

You might notice that I use in this guide a product I make, the glass bed hones, so yes this is another example of industry funded research but I hope I was able to keep my conclusions and analysis detached from my mercantile nature.

Since there is very little information about using the 3M films or the "scary sharp" system of honing on razors I set out to first, use it successfully for this purpose and second develop a set of procedures anyone could follow when using this method. In both I was successful. This guide follows every step I used to bring a out of condition razor back to shaving sharpness using the 3M films, and I did so with a minimum of difficulty as discussed in my conclusion. 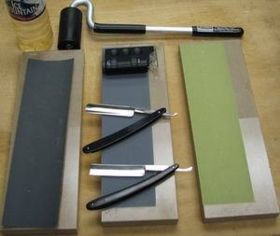 Everything I used in this experiment is pictured on the right

The water is simply from my tap.

The microscope used for testing is the one from Radio shack set at 60x.

The bottom razor is in need of a refresh honing, and will be covered in the future.

The top razor is the one I used in this experiment, it is a Geneva Cutlery Company 5/8's round point razor. I obtained it from my mother in law as it was her fathers or grandfathers. It had not been used in at least thirty years and was simply stored in a drawer for that time. Prior to this experiment it was polished using a Dremel and MAAS with the felt pad as shown in Lynn's video. Nothing else has been done to it.

The beds for the films are glass over MDF treated to resist water with rubber feet to make a secure smooth surface for honing.

The papers/film were cut to roughly 3 inches by 11 inches and the grits used are as follows from left to right: 1000 grit 3M wet dry sandpaper form the auto parts store. 5 micron 3M Abrasive PSA film from http://www.toolsforworkingwood.com 1 micron 3m Abrasive PSA film from the same source, I chose this source as they have the best price in a quantity I desired.

Finally The laminate roller on the top is from Lowe's.

Note: There is .5 micron film available as well, I didn't fell that it would be needed to make for a good shaving edge, and the ease of use of pastes in this grit make it superfluous.

In order to develop this method and be successful I needed a place to begin. So for this experiment I started with the Pyramid method of honing as enumerated in the Norton Pyramid Honing Guide by Randy Tuttle[1]. This guide is for the Norton 4/8 K stone and I used it along with common sharpness tests, microscope views and my knowledge of honing on stones to sharpen the razor as follows. 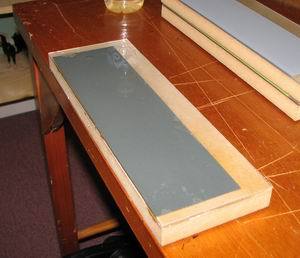 Asses the razors edge. This is done to see where to begin in the honing process. I looked at the edge using the microscope and was able to see many tiny chips, most less than naked eye visible, all along the edge. The Thumb Nail Test (TNT) was then performed and the razor just slipped along its entire length with no bite, or total failure. This led me to decide that 1000 grit was the place to begin honing, or setting the edge.

Prepare the 1000 grit hone. I took one glass bed and wet it with about 2 tablespoons of water. I also put water in a bowl and soaked the 1000 grit paper until the backing was wet (less than 1 min). I then smoothed the paper out on the wet glass bed where it sticks because of the waters surface tension.

Set the edge using the same edge-leading honing stroke you would use on a stone hone. The total was 28 strokes on the 1000 grit as follows. a: 10 laps on the 1000 grit. Then I tested with the microscope seeing most of the tiny chips gone b: 5 more laps. Then observed the most of the razor is free of chips excepting the toe area. The TNT confirmed this with biting over much of the length and slipping only near the center and on the toe of the razor. c: 10 laps. the microscope now showed a perfectly set razors edge excepting a tiny chip near the toe. d: 3 laps toe only. These laps were taken very lightly the intention being to emphasize the chipped area only. This got rid of the chip according to the microscope and the razor now passed the TNT, with the razor smoothly biting along its entire length.

Note: had these few strokes not worked I would have gone back to honing the entire edge to prevent wear to one section only.

My honing strokes are pictured below. Note the angle of the razor, I also use the x pattern even on such a large surface. This stroke is taken the same way using only the weight of the razor or less on every grit of hone I use. 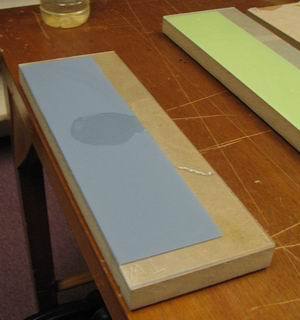 5 micron hone just before spreading the water across the surface

Preparing the hones with the PSA films. I peeled the backing paper off the honing film and setting it gently on the glass beds as it appears in the pictures below. if you set the film gently enough on the glass surface it does not stick right away allowing you to slide into perfect alignment with the edge. I then used the laminate roller with moderate pressure to press the film to the glass and to roll out any bubbles that appeared. This was the most difficult step and will be discussed in my conclusion below. Each hone was then lubricated with about a tablespoon of water, no more is needed or wanted, and kept this wet throughout the honing process as needed.

At this point, with the edge just set, I find an aggressive pyramid is usually in order when using waterstones so that what I did here as well. The strokes were as follow with the first number being the 5 micron and the second being the 1 micron honing films. This is exactly as taken from the Norton Pyramid Honing Guide:

I move to the conservative pyramid because the razor is getting an edge but it isn't shaving sharp yet. This is laid out like the Aggressive pyramid above and from the same source:


Now the edge looks very well polished to the microscope aided eye but still fails the Thumb Pad Test (TPT) though it is much sharper than before.

This is where my experience steps in. This razor is quite sharp and almost ready to shave, another pyramid might lead to overhoning. So I did 30 laps on the 1 micron only. I'm done with the 5 micron It won't help me any more, and neither will my microscope as the edge looks the same as above. The TPT again show some improvement and the edge smoothly removes hair from my arm but the TPT also tells me the edge could be a bit better. 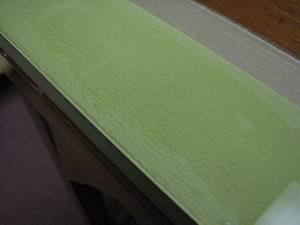 I gave it 20 more strokes on the 1 micron, and now the TPT tells me this is a shaving edge. So I move upstairs for a shave test.

Note: The stroke totals were 54 on the 5 micron and 125 on the 1 micron with the whole process from start to finish taking less than an hour and most of that being spent making notes and testing the edge. Very little actual time was spent scraping the razor up and down the hone.

Shave test. Surprisingly, this was a very good comfortable shave. I was expecting the edge to need a little refinement, perhaps on a pasted strop but I got a very nice and comfortable shave. I used TGQ Black Cavendish as this is a good performing and very consistent soap for me. I also used this razor for the next several shaves with various soaps and cremes and its performance remains consistent.

This proved to be a viable and not particularly difficult method of honing for me to use with several advantages over the more common stones. I felt it was quite fast. The films are very consistent. There is no soaking time. There is no break in time. The cost is extremely low for very large hones. It worked better than a two sided stone for pyramiding.

There is, on the other hand, one big drawback to this system. You must build your own honing surface. The glass beds worked well and, for me, were easy to make and I even sell them quite inexpensively so they aren't the problem. It is applying the honing film to them that can prove quite difficult. It was only on my third strip of film that I got the film stuck to the glass in a satisfactory manner. The first piece had to many bubbles and the film was misaligned, I removed it and reapplied it scratching it in the process. The second piece also had to many bubbles that would not press out and on removal from the glass the adhesive came loose in patches causing me to discard this piece as well. The third one went on quite well and easily making me wonder what the fuss was about, but I can't count on this every time. I also don't know the longevity of a piece of film, but I suspect that it is only three or four razors.

Because of the difficulty of applying the film and the fact that it will have to be reapplied at intervals I would not recommend this system to a beginning honer. Once someone has a good grasp of the quality of surface needed for honing a razor it isn't to hard to get it using the method described but this is outside the experience of the beginner. It is exactly those beginners whom will be most attracted to this system due to its low price so I highly doubt this will ever become a mainstream method for honing razors. It remains a very effective but outside of the ordinary honing experience, and one I will personally stick with, but not for everybody.

It is important to note that the paper system is as capable as any bench stone/hone system for touching up a edge that has gone off from use but still nothing beats a hone you can use right at the sink and store with your shaving supplies for those last final touch ups that give the most refined shave. But I safely recommend using these abrasive films as a viable way to enter the honing realm with start up costs much much less than those of a traditional hone.

This article was originally posted on SRP[2] by WildTim[3]