From Shave Library
(Redirected from PHIG)
Jump to: navigation, search

This waterstone is often called the Chinese 12k (C12k) or The Peoples Hone of Indeterminate Grit (PHIG), and it is a stone quarried in the Guangxi province in China. The 12k grit rating is from the Woodcraft catalog, but that rating has been disputed by many. Some say they are higher, while others say they are lower, but the consensus seems to be that they are in the 10k to 12k range and are fine finishers.

As is typical of natural hones, there is some variation of grit range and cutting characteristics from one stone to another. Some stones are softer and produce a light slurry with use; they typically cut more quickly, but produce an edge which is less keen. Some are somewhat scratchy, and may have inclusions which can interfere with the polishing of the edge. Others however are both hard and fine. It seems the stones which are gray with dark figuring may be among the finer finishers.

These stones are always rather slow cutters, sometimes requiring 100 or so strokes to finish. This can be sped up by starting with a light slurry and diluting it to finish with just water[1].

While there may be many companies quarrying and selling these stones, one known to forum members is Mujingfang[2].


Here are some links to discussions on the Chinese 12k hone. 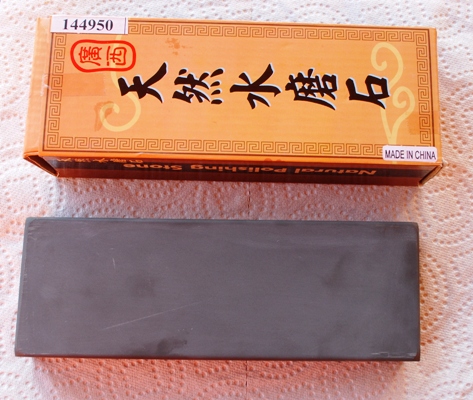