What is Razor Acquisition Disorder, or RAD? Basically, is a disorder where you feel the need to acquire more razors. This is something that you probably think will not happen to you. I know when I first started out, the whole idea of Straight Razor Shaving was to save money and get a better shave. The following is my brief story of RAD, which explains at least how mine started.

A story of Razor Acquisition Disorder or RAD[edit | edit source] 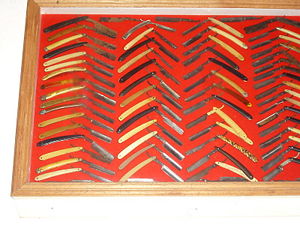 I started out by ordering a cheap strop, a cheap badger brush, a cheap razor and some shaving soap. I figured that would be it, no more purchases required. At that point I had not found the Straight Razor Palace or the Wiki, so by reading this, if you have not already made your purchases, read up a bit first and get things right from the start.

Anyway! Razor Acquisition Disorder for me, started with my first razor, it was some really bad Pakistani blade from what I can tell (it is un-marked). It was not shave ready, it was terrible. So straight away, I was looking to buy a second razor.

It started with eBay, checking eBay auctions and the classifieds on Straight Razor Palace. I finally got fed up and went out and purchased a Dovo Solingen, which came advertised as "shave ready".

So home I went and was able to shave.

From shaving to restoration[edit | edit source]

But soon I did not want to be dependent on someone else to hone my razor, so I set out to purchase some stones, but with my in-experience, I did not want to ruin my new Dovo! So in my logic, I decided that I would buy an antique razor, restore it and hone it, that way it would not matter if I damaged it, because I still have my Dovo sitting there.

So after spending money on a second razor, a set of hones, I was set to start restoring.

I did not have any polishing compound or sanding paper, so I went out and purchased that. Then after taking before and after shots of my newly restored razor, it was quite a cool thing. After all, it is an antique as well! The razor is older than me!

So then I read that it is best to leave your razors sit for at least 24 hours after each use, and that a lot of people actually have a 7 day set, i.e. a razor for each day of the week. So then I start justifying looking for more to purchase, up to 7, one for each day, then no more will be required.

So then I start checking eBay and the classifieds, looking for razors to add into the set. Then I win an auction for 6 old razors, putting my total up above 7. So now I am starting to justify that I can restore and sell them/gift them on and try and upgrade them to better quality razors.. But I can see that I will end up holding onto more and more..

You might think reading this that it wont happen to you, that you will only need 1 razor and that will be it. But that is exactly what I thought starting out, and it is starting to get out of control.