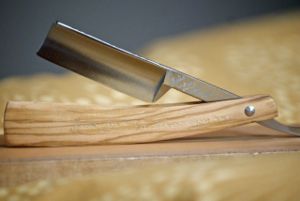 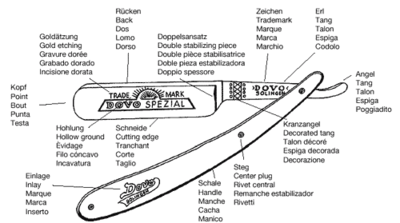 Point/Kopf/Bout/Punta
the left end of the blade.
Blade, with a Back/Ruecken/Dos/Lomo
the part of the blade opposite the cutting edge(Spine), and an Schneide/Cutting edge/Tranchant/Corte (pointing downwards).
Tang/Erl/talon/Espiga
the complete non-cutting metal part fixed to the blade, serving as a grip for the index, middle, ring, and little finger.
Jimps
ridges/notches along the tang present on some razors as a gripping aid. If present this is usually on the underside, but can occur on both top and bottom of the tang
Double stabilizing piece/Doppelansatz/Double piece stabilisatrice/Doble pieza estabilizadora
two close parallel vertical rims situated where the tang continues to the cutting part on the knife. Sometimes there is only one stabilizing piece. It is also referred to as 'shoulder'.
Decorated tang/Kranzangel/Talon decore/Espiga decorada
some sort of art where the blade stops and the tang begin.
Handle/Schale/Manche/Cacha
the part of the razor that contains the blade when closed. Sometimes it has an Einlage/Inlay/Marque/Marca (text, mark on the handle).
Center plug/Steg/Rivet central/Remanche estabilizador
the middle plug on the handle; Hohlung/Hollow ground/Evidage/Filo Concavo: the biconcave form of the blade in transection view.
Gold etching/Goldätzung/Gravure doree/Grabado Dorado
the mark or text on the blade.
Trade mark/Zeichen/Marque/Marca
the mark/text graved on the tang.
The Ridge/Der Wall
parallel to the back and the edge, running from point to the stabilizing piece, is a thickening of the blade, the purpose of which is to stabilize against torsion in the horizontal plane, and to give the edge elasticity. The stabilizing piece gives the blade torsion resistance in the vertical plane. If the ridge is close to the edge, it is called ¼ hollow ground, the lowest grade of hollow ground; if it is close to the back, it is called 1/1 or full hollow ground; ½ and ¾ are in-between. 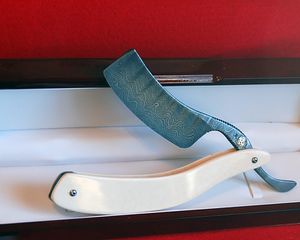 Pure iron is a relatively malleable metal which cannot be honed to get a sharp edge. Steel is an alloy of iron with a certain proportion of carbon. Higher carbon content makes steel harder, thus allowing a sharp edge to be produced, but at the same time making it more prone to breaking. Steels used for straight razor blades (and cutlery in general) typically have 0.5-1.5% carbon by mass.

However, the carbon content is not the only factor which determines the properties of a steel. Other metals are usually present, either intentionally added or because they exist in the iron ore : nickel, vanadium, chromium, molybdenum are among the main "steel modifiers". In particular, stainless steel by definition contains at least 10% chromium.[1] Many razors use stainless steel blades. The most obvious effect is that those blades are considerably more resistant to rus. Also, stainless steel razors generally can keep their edge longer, since the oxidation of the steel is slower.

The smith can subtract a varying amount of steel to produce a hollow blade. The chart show various levels of hollow blades, from "extra hollow" to "true wedge". A hollow blade produces a crystalline sound while cutting a hair.

The main objective of hollow ground blades is to make honing much easier. On a true wedge blade, the honer has to remove steel on the whole flank. By contrast, on a hollow ground, only the very edge of the blade and the flank of the spine are to be thinned, which requires much less effort. The spine must rest on the stone (or the leather). It ensures that a constant honing angle is applied. During the lifetime of the razor, the blade is somewhat narrowed by successive honing cycles, but the spine is also thinned, thus the honing angle remains the same. 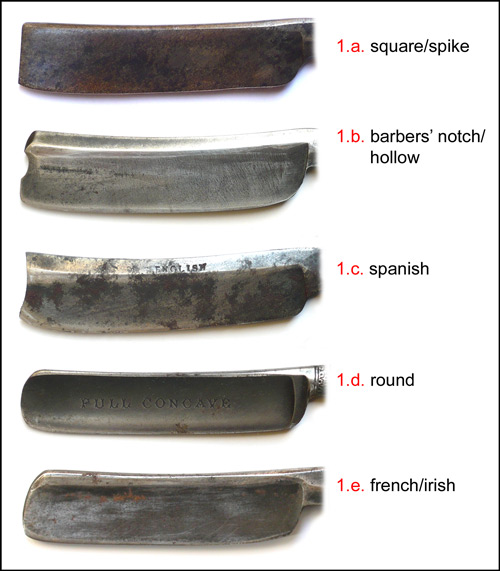 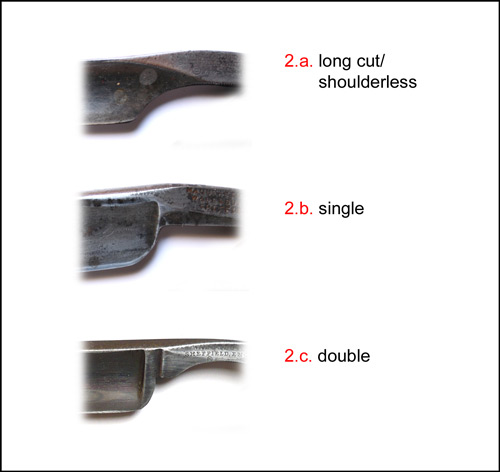 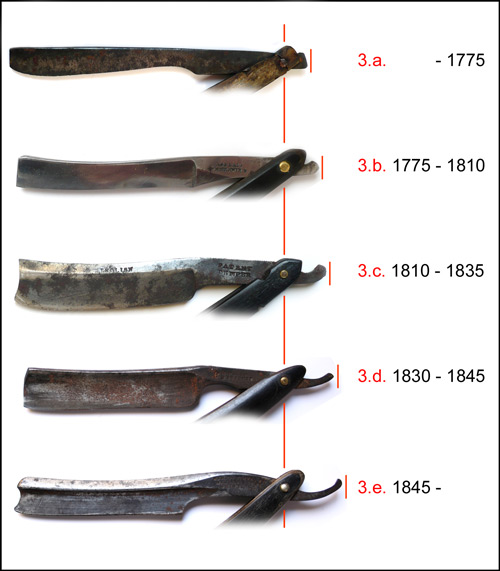 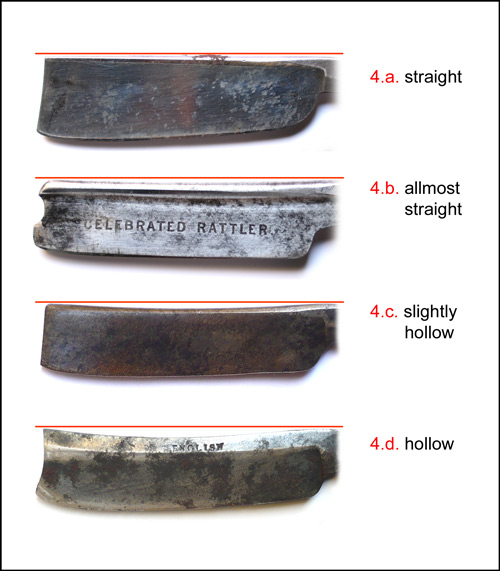 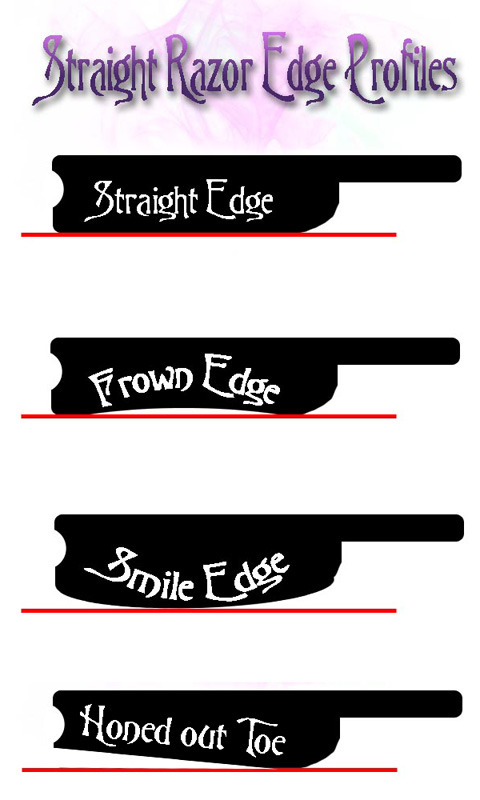 Plastics are artificial polymers. They are generally classified between thermoplastics and thermosetting plastics. Thermoplastics, such as epoxy, turns liquid when heated enough, and are melt to mold a desired object. Thermosetting plastics, such as polyethylene, PVC, polypropylene, or Bakelite, are made from two or more reactants, which are heated to provoke the polymerization. Thus, it's the heating that created the plastic, and this process is not reversible. One created, the object can not be melted back, reshaped, nor recycled.

Micropitting, or Devil's Spit, is very fine corrosion that can tunnel into the steel and cause damage beyond what you can see. Viewed with a good 10x hand lens it looks like random, black lines and pores. If it occurs along the edge, the blade may not be recoverable for shaving.