Making scale designs on the computer

This is a presentation of some basic procedures for creating razor scale forms using the computer. Although almost everything in this article can be done using classic drawing tools on paper or card stock, a computer system does offer some advantages in that one’s work can be printed out numerous times, as well as altered and resized for use with other razors than the one for which they were originally intended.

Naturally, every single one of you reading this has some sort of a computer, be it Mac, Windows PC, Linux box or what have you. If, in addition to that, you have a printer and (hopefully) a flatbed scanner, then you have all the hardware required to do pretty much the same as as shown here for creating razor scale designs.

NOTE: These procedures will be covered only in a very broad and basic way, just showing you the steps which one goes through along with a few tips. It would be interesting to go into more detail, but you all have different computers, using different scanners, printers and graphics programs, so that it would just be impossible to cover them all within the a single article.

Which graphics programs to use is another large question. A very popular photo retouch program is the Adobe Photoshop. For vector work (linework) Adobe offers theIllustrator program. But these are personal choices and it must be admitted that the Adobe products have always been somewhat expensive. But we are not doing anything fancy here, so almost any programs worth their salt should do the job. There is even pretty good freeware available which will do everything we need to do for this project. Two freeware programs that can be recommended are The Gimp for photo retouching - www.gimp.org/ - and Inkscape for vector work -  www.inkscape.org/

Let’s now turn our eyes to a sample razor to restore. The old scales are of some sort of wood. They are pretty worn and look somewhat oversized for this blade, although they are actually too short for the blade to close properly. We will replace them with a new set made from Micarta (cloth fiber embedded in epoxy resin).

By the way, take a look at those rivets. Wow, those are some oversized monsters! In truth, the pins are cut off nails and those round ‘heads’ are actually blobs of melted lead solder (ouch!). We will grab for a metal file, remove the rivets (and old scales) and continue with the article…

Here is the blade, removed from the scales. Notice that dimple slightly forward of the rear pivot hole. The scales were just slightly short and the man who put the wooden scales on this razor thought to redrill that hole so that he might move the blade back to give it a bit more room. He didn’t realize that a razor is made of hardened tool steel and is a pretty tough contender for ordinary drill bits. Other than that, the blade isn’t in such bad shape. We will need to spend a few quiet hours sanding and polishing to clean it up. But there are other articles here on the SRP forums which give you information about refinishing blades, so we will not go over it again here. Time to start designing some scales. 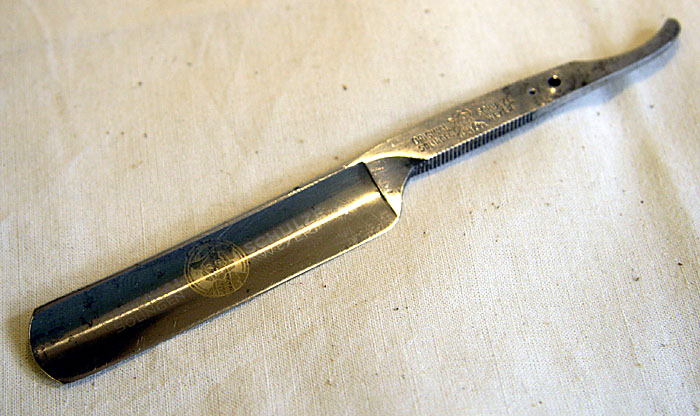 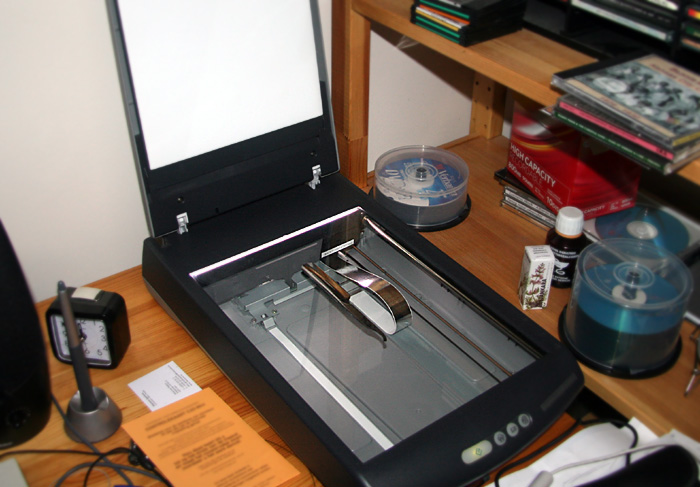 
The first problem is that a camera does not take a truly ‘flat’ image like a flatbed scanner. There will always be problems with perspective and some amount of distortion due to the imperfect optics of camera lenses. A flatbed scanner – even a cheap one – will always spit out a flat, distortion-free image, which is what we want for our purposes.

The other problem with a digital camera is that one has no real idea of the size of whatever one has photographed. The brilliant thing about a flatbed scanner is that when we get an image out of it, that image already has, encoded within it, the physical size of the scan. This means that if you don’t change or somehow screw up that size encoding, you should be able to print out that scanned image and end up with a printout in the real world which is the same size of what you originally scanned. It is exactly this property that allows us to design a scale shape around the scanned image, spit it out onto paper and use that printout as a reliable cutting and drilling layout.

Having said that, it is still possible to follow the same procedure using a digital camera, but you, yourself, will be responsible for setting up the shot properly (This is essentially copy photography) and then later the additional steps of resizing your image so that it prints out at the correct size in the real world. Any discussion of those techniques is definitely outside the scope of this article. So, moving right along…

Covering all the different aspects of making good scales is not within the scope of this article aside from offering a few hints.

Never forget to make your scales wide enough so that the bottom of the blade has no chance to poke out and cut you when the blade is closed (see ‘A’ and ‘B’).

Designing scales on the computer this way allows us to ‘see’ the required clearance for the front wedge ahead of time. Note the two arcs in the linework, both centered on the rear pivot hole (‘D’). One arc just touches the absolute end of the razor blade. The second arc has a radius which is a slim 1/16” of inch wider. Having those arcs to look at is a good reference in allowing one to decide how far the toe of the scales have to extend in order to give a good, stable amount of area ahead of the toe of the blade for the wedge and front pin.

Notice the extension of the scales behind the rear pin (‘D’). When using Micarta we could actually make that shorter, but when using other materials like wood, plastic or bone this scale extension is a good thing as it adds strength and somewhat reduces the tendency of the scales to split around that hole.

Last of all, we are going to stick our printout onto the scale material. A very good adhesive for this purpose is rubber cement. It is inexpensive, does not stain, goes on easily and (more importantly) comes off easily when you no longer want it.

Time to head off into the shop for the cutting, shaping and finishing. But that is for another article...

This article is based on original work by Ignatz[1]